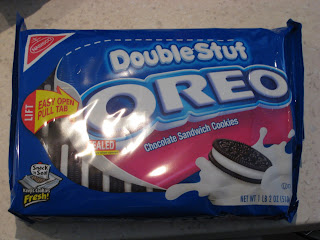 I know what you are thinking, double stuff Oreos, big deal. Oh, but here apparently a very big deal. I found a store over Thanksgiving that carried American products, mainly processed food stuffs that you can't get here: Aunt Jemima pancake mix, Karo Syrup, Oreos, peanut butter, certain cereals, Kraft Mac and Cheese, etc. I thought it would be nice to pick up a few items the other day. I knew everything was a little more expensive and decided that a few items wouldn't be so bad. Ha ha, now I know why they won't put a price on anything. Hoping everyone will do what I did and pay, drum roll please,

My lab had a Christmas party at work and one after hours at an American/Mexican restaurant. They both involved the secret santa gift exchange with a twist. We were only allowed to spend 50 crowns, which is about $2.50. I was worried this might be kinda hard, but turns out they have stores like The Dollar Store here in Prague too. I didn't take pictures at work, but did manage to catch everyone's gifts at dinner. On a side note, good mexican food is hard to find here. Amigos, where we had our party, was OK, but today we FINALLY found a place - Cantinas. Thank you, Thank you! Sorry, off topic, but extremely important for Brian and I. Anyways, back to cheap Christmas gifts.... 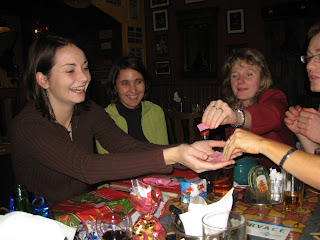 Kaya decided instead of numbers she would write down animals and hand them out to everyone with the presents labeled with the corresponding animal. After a few drinks, we noticed she really liked types of monkeys. 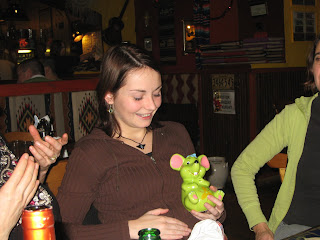 Kaya got a piggy bank that was a bright green mouse with a buddha belly. 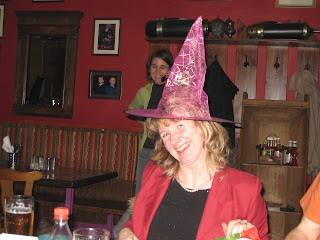 Romanka got a pink witch's hat. Everyone always needs a good witch's hat, just in case. 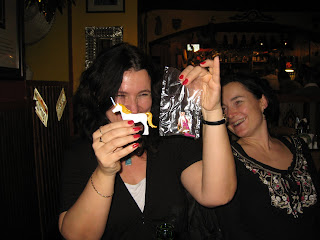 Ivana got a unicorn along with a little grooming person. I mean unicorns are for good luck, right? 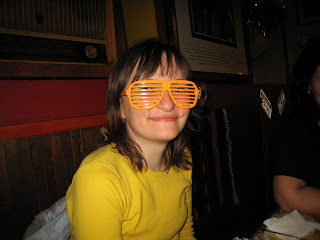 Darina may have gotten the best gift: orange slit glasses. I said they were "Kanye West" glasses, and then everyone asked me who that was....guess he's not international yet 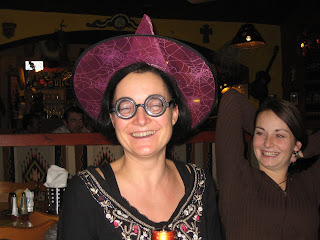 Míša (sounds like Misha) also got a pretty cool gift: Harry Potter glasses, kinda. Both glasses were a big hit and we all thought it necessary to try them on. 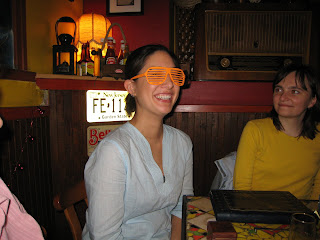 I mean, honestly, can you resist trying these babies on? 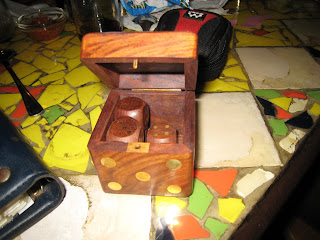 Here is my gift, not that funny, but way useful. Brian and I were thinking we were in need of something to entertain us at home other than just each other and the computers. I said the only game I knew how to play was called 'Shit'. Turns out that game is actually called 'Farkle'. Ian you should probably tell Shari she misinformed us. 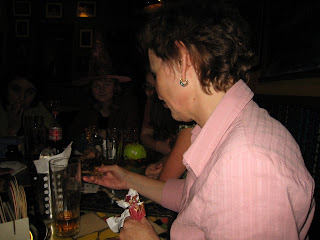 You can't really see it, but it's not very stimulating. Our boss, Iva, got a bag of dried fruit. I tried one and honestly don't know what kind of fruit I was eating. 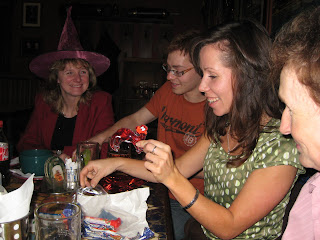 Daša (sounds like Dasha) got a dinosaur shaped soap and some candy. Not super exciting, but will probably get used more than the witch's hat. 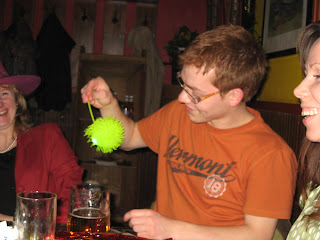 The most entertaining gift, Michael got a light up green animal bouncy thingy. Sorry, best description I could come up with for right now. 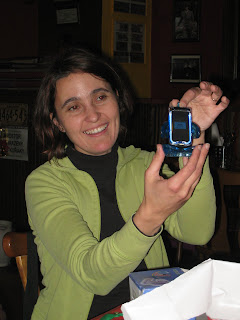 Romana, my lab partner, was lucky enough to get both of my secret santa gifts at both parties. During the day - liquor magnets and a ghostbuster bottle opener. Tonight's gift? A dolphin cell phone holder that lights up when you call the phone. 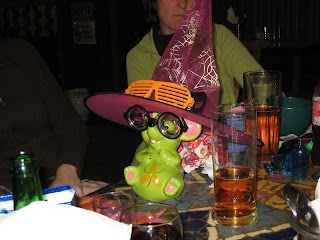 And a combination of some gifts to end the night!
Posted by Unknown at 12:44 PM No comments:

December 6 was Sv. Mikuláš Day (St. Nicholas) in the Czech Republic. The night before St. Nicholas comes out and visits with all the children to see if they have been bad or good. This seems very similar to the Santa Claus tradition in the U.S. with one exception: instead of helper elves there is an angel and the devil. The children must say a poem or sing a song to him to get treats from him and show that they have been good. If they have been bad the devil will try and scare the children into being good. I was told that the devil comes out in the streets or in apartment buildings trying to scare children during this night. If the children are bad they get a bag of coal instead of treats. In the stores there are even devil decorations along with the traditional Christmas decorations. Seems like a combination of our Halloween and Christmas. I like it, remember - scared straight? Brian and I got caught by St. Nicholas and had to say a poem. We stuck with what we knew: Mary had a little lamb and Row, Row, Row your boat. Hey you see what you can come up with on the spot, St. Nicholas suggested our national anthem, ha ha, yeah right. Me singing is never a good idea.
Posted by Unknown at 5:50 AM No comments: