Well, I keep meaning to post some new pictures and video and haven't gotten around to it. So I will just type a quick update until I get around to the extras this weekend. Riley has officially got a pediatrician that we will be seeing more than once now that we are settled in one place for at least a year or two. I knew he was skinny, but it's always funny to get it confirmed by a professional. Riley is 29 inches (97%) and 16 lbs 11 oz (21%). That's right people, the tall and skinny has manifested at 6 months of age. Actually, I noticed it back in December when we weighed him at the Health Dept. I am now officially surrounded at home by guys who can eat whatever they want and not gain any weight. Awesome!

Oh yeah, and I am officially employed! Woo-hoo! I got a job as a Scientist for a start-up company in Boulder called InDevR. I am working on an instrument called a Virus Counter, that they designed and just launched this month. It's great so far and it's really nice to work in a small company. Now, if I can just get my science talk back and get rid of the baby talk I did for 6 months. Brian is still trucking along as a post-doc at the University of Colorado in Boulder.

I got an iMac and will finally get to view and edit all of our videos of Riley that we haven't gotten to see because our old laptops couldn't even process the HD video. So that is my project for the weekend - 6 months of video to go through. I have a feeling I might not get to all of it.
Posted by Unknown at 9:40 PM No comments:

Wow, I uploaded these pictures and forgot to post them on the blog. Here it is February and I am posting Riley's 1st Christmas....bad mom. Laura and Dad came up for a week for Christmas. Dad got us Beatles' Rock Band and we jammed like the Partridge Family. 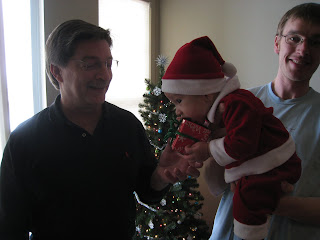 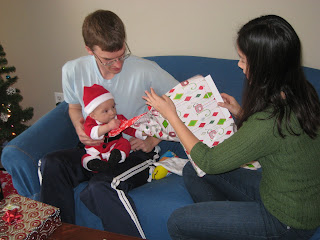 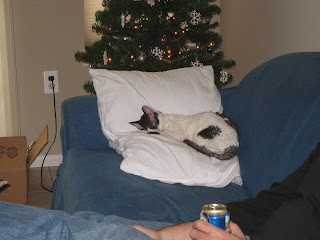 Oliver and Dad reuniting together on the couch (they are trying to act like they didn't miss each other). Oliver got to spend about 3 months with Dad while we were coming back from Prague and driving to Little Rock and they bonded. Bonded in fact so much I now have a cat who WANTS our attention! 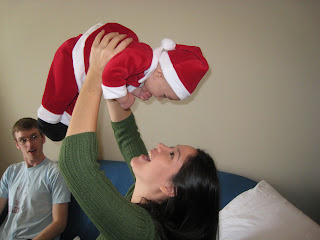 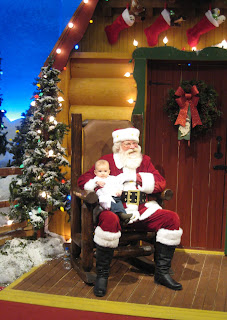 Riley visiting Santa for the 1st time at the Bass Pro Shop.
Posted by Unknown at 10:53 PM 1 comment: