I thought I would try out my new camera phone and take some pictures from this week. First up is about food. Most of you know that I love food and am willing to try just about anything, except stinky tofu. If you don't know what it is, be glad, if you do, you can understand why I couldn't try it. Oh the smell. Well, this week at our cafeteria at work they had a new soup I hadn't seen before. It didn't look amazing, but it did sound interesting, at least to me. 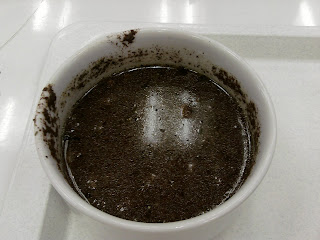 Pig blood soup, don't it look good? Let's just say it tasted only slightly better than it looked. That grainy looking black stuff is congealed blood. If you have had blood sausage, this would be the equivalent of blood sausage soup. If you didn't have to look at it or know what it was, it would probably taste a lot better. 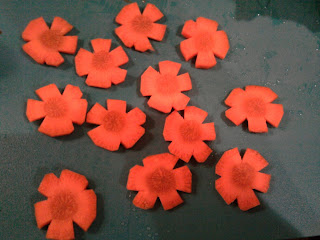 I came across a new blog that seems pretty interesting. It is called 'happy mundane' and has random things posted on the blog. This past week it had instructions of how to make carrot flowers. So here was my first attempt at a simple craft that maybe even I could pull off: carrot flowers. Pretty easy, and puts a smile on my face. 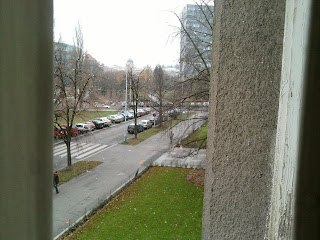 This is the view from my office. There are 2 important parts of this picture.
1) I worked in a basement for 5 years in Chicago and now I have 6 windows and a view, pretty awesome.
2) This was the first snow in Prague, ok maybe second, but I was asleep the first time. If you look REAL hard those barely there white specs are snow (in the grass it's a little easier to see). The only good thing that comes out of winter, snow!
Posted by Unknown at 11:44 AM 1 comment:

Blogger and I have been having some issues. Luckily, Leslie was so nice to tell me how to embed a slideshow from picasa. SO MUCH easier than downloading each picture. Thank you Leslie!!

This past weekend we had a blast at a wine cellar. My friend from work, Dáša, was nice enough to invite Brian and I to Vinařství Dwořáček, a South Moravian Wine Cellar in the town of Valtice. Moravia is famous in the Czech Republic for their wine and this past weekend was the beginning of the celebration of St. Martin's Day (Nov. 11). It is the first time everyone tries the young wine from the previous year. We headed on a bus with Dáša, her husband, Franta, and their group of friends. Everyone was great and we started the party as soon as we got on the bus. After a 4 hour bus trip we checked into our hotel and went for a late lunch. There is a special meal during this celebration: goose with potato or bread dumplings and cabbage. The goose was delicious! We got a 2 hour break so we went bowling with some friends before heading to the wine cellar. We sampled about 10 types of wine, sang (or we listened), danced (got suckered into that), and played some musical instruments (or tried really hard too). The next day we had to get up for breakfast at 8:30, head back to the wine cellar to try it again (oh yeah, that's right 6 hours wasn't enough), buy some wine, and then headed back to Prague. We had an awesome time and they invited us to go on their Annual April trip, too. We definitely want to go!

What happened to day 2? Day 1 ran really late into the night and we missed our wake up call. We spent the day in our hotel room laying in bed. So we wasted an entire day recovering from the night before. Most people would like to go sightseeing around the town, we decided to check out the nightlife instead. 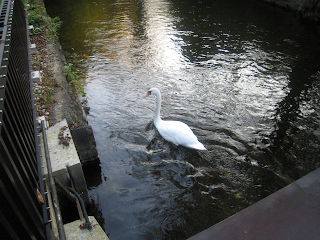 We did manage to get up later that day and walk around outside by the hotel. There was a nice creek with a swan floating down the stream. The stroll around the creek was almost worth the cost of our pre-paid tour we missed.......yeah right. 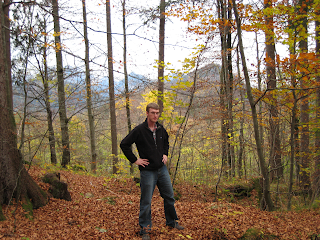 We sucked it up and paid again to ride a train to the area where Neushwanstein Castle was located. They had a really nice hike up to the castle that had some great views of the town below. Here is Brian declaring this spot on the trail as his own. 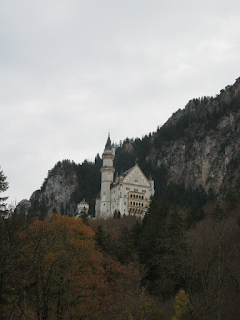 The hike wasn't very long, but it was pretty much uphill the entire way. I decided to take some breaks and take pictures of the castle from below. 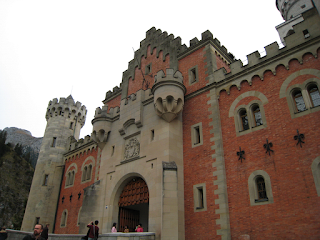 Here is the entrance to the castle. We had a guided tour in the castle of only 16 rooms. There are a total of 65 rooms, but only 16 are completely finished. King Ludwig II built this castle starting in 1869 and spent so much money building castles around Bavaria that when he died (1886) they stopped all construction that he had sanctioned. Although it was built in the late 19th century, this castle had electricity, a telephone, steam engines, modern venting, plumbing, and heating pipes. The rooms were amazing and very intricate, and of course, no pictures were allowed. 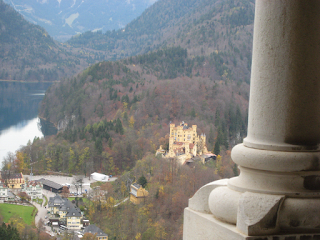 At the end of the tour we took some pictures of Hohenschwangau Castle from the window. This was another Kind Ludwig II castle, but we didn't have time to visit it. Neuschwanstein Castle is owned by the state of Bavaria, but this castle is owned by Franz, duke of Bavaria. I wish I owned a castle.
Posted by Unknown at 12:08 PM 1 comment:

Someone in my lab was nice enough to tell us that Tuesday, Oct. 21 was Czech's Independence Day, meaning our first holiday. We decided to take Monday off and have a long weekend. I had been wanting to see 'Cinderella's Castle'. Turns out this is in Bavaria, Germany about 2 hours outside of Munich and it is called Neuschwanstein Castle. We went and bought our train tickets the week before and got up nice and early on Saturday to head to Munich. Of course we get to the train station only to find out that we are at the wrong one. Luckily, by some miracle, we were early enough to go to the correct station and still make our train. 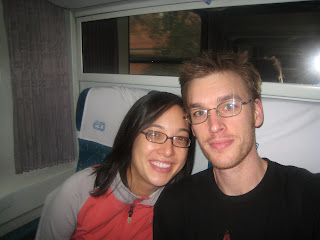 So here we are, smiling because we are in first class and we don't even know it. Luckily after 5 hours on the train an attendant was nice enough to tell us to move to 2nd class even though we were only one stop away from Munich. 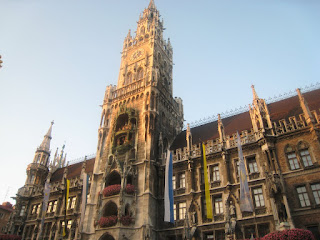 Our first task in Munich? A beer tour of course. This is the New Town Hall (City Hall) in the center of Munich, a very nice place to meet for a beer tour. We almost missed the tour because our hotel was a little farther outside the city than we thought (think walking on the side of the road where there is no sidewalk, but some nice farmland). 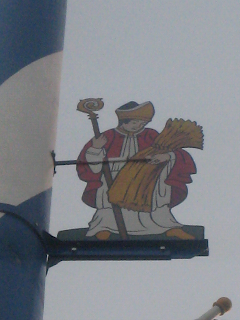 We had a very nice tour guide that explained some beer historical facts. One specific image was very interesting to me, a priest holding some barley on the town maypole. That's how important beer is in Germany! This is from a maypole that historically was in every village showing visitors what was in the village. We also learned that beer gardens in Germany must have 3 chestnut trees to be an official beer garden and there are places for you to sit with your family and bring a picnic and hang out or a section to eat from the restaurant while enjoying your 1 Liter beer. 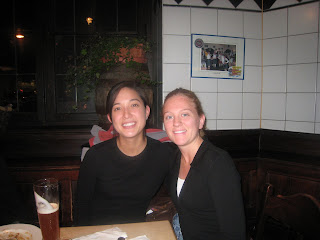 The night started out promising. We went to a brewery and had dinner and I met Nicole, a newlywed from Ohio. We ran into her and her husband again 3 days later at Neuschwanstein Castle. It really is a small world. 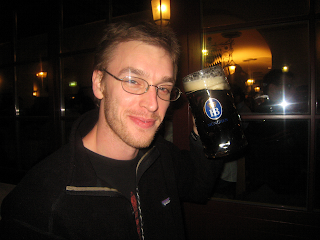 Then we were off to the famous Hofbräuhaus. This brewery was started in 1589 by Wilhelm V., Duke of Bavaria. Bavaria is the region of Germany that Munich is located in, kind of like a state in the US, I think. Here is Brian with his 1st 1 Liter beer. 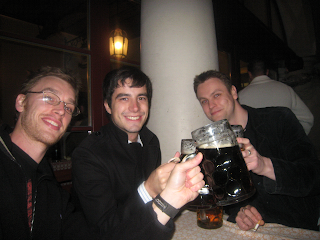 And here is Brian with another 1 Liter Beer. We met some guys on a bachelor party from England and the night just kept getting more exciting. 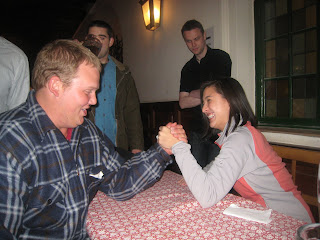 How do you end your night at Hofbräuhaus you ask? By arm wrestling the biggest dude you can find. That just happened to be Nicole's husband, Nick. And who won? Why I did of course! He may have 'let' me win, but I have some rock hard biceps.

And the night continues, but without pictures. We went with the guys from England to the Atomic Cafe (http://www.atomic.de/). We were there until 4 am. Interesting, because we had to be on a Castle Tour the next day at 8am.
Posted by Unknown at 4:31 PM 1 comment: